Moleskin vs Duct Tape: The Pros and Cons for Blister Prevention While Hiking

Blisters can be a real pain. And, if you’re like me, you hate the thought of having to stop your hike early because of a pesky blister. So, what’s the best way to prevent blisters from forming? Is moleskin better than duct tape for blisters? How do you know when to use one or the other? In this blog post, we’ll discuss the pros and cons of using moleskin vs duct tape to prevent blisters while hiking. We’ll also give you some tips on which material fits a certain situation better than the other.

The moleskin material is a thick and soft cotton flannel that has been impregnated with an adhesive. The moleskin has the feel of felt or chamois, which makes it easy to cut into any shape you need. Because moleskin isn’t as sticky as duct tape, there’s less chance of damaging an existing blister when removing the moleskin from your skin compared to duct tape. Moleskin also provides excellent cushioning, so it’s ideal for blisters that have already formed. Another benefit of moleskin is that it’s relatively breathable, so it won’t trap moisture and worsen blisters.

One thing to consider when using moleskin is that if your socks are damp (or wet) then moleskin can be less effective at preventing blisters. This is because moleskin doesn’t stick to wet socks as well and it’s more likely to roll up, or shift around when your foot moves inside the sock.

Duct tape has been used by hikers for many years as a quick fix solution. It’s cheap and readily available, but there are pros and cons to using it. Duct tape can easily irritate your skin, especially if you already have a hot spot or blister formed. You can pair duct tape and moleskin by placing the moleskin underneath the duct tape. This provides extra cushioning while using something stickier than traditional moleskin.

Duct tape works well for preventing a hot spot from developing further, even if your socks are damp, which is a time when moleskin won’t stick. If you’re hiking in wet or rainy conditions, then duct tape can be a better solution than moleskin because it’s more waterproof and will stay in place on wet feet and socks much better.

When to Use Moleskin vs Duct Tape?

Both moleskin and duct tape work well at preventing blisters from forming but each has its own pros and cons depending on the situation. Here are some tips on deciding whether moleskin would be best for you (vs using duct tape), or vice versa.

New blister prevention: Moleskin is best used for preventing new blisters from forming in dry conditions and it’s less likely to irritate skin than duct tape. Moleskin can be placed on hot spots before they form into a blister (or right after one forms) so that continued friction doesn’t cause further damage or irritation. Moleskin also provides cushioning for the skin underneath so it will protect against chafing as well, which helps prevent the formation of blisters in areas where there is already some tenderness due to rubbing or moisture build-up between layers of clothing.

When moleskin isn’t available or isn’t sticking: if you’re not able to get moleskin, or have run out on trail, duct tape is a great back up plan. It can really help prevent blisters, cool hot spots, an even protect blisters that are already formed. It’s just extremely important to protect blisters before using duct tape and the best way to do this is to first cover the affected area with gauze or a non stick bandage. Then cover the entire area in duct tape.

Moleskin should generally be used for blisters that have already developed, while duct tape can be used as a preventative measure and is great for hikers who are hiking in wet conditions. The key difference between them is that moleskin is less likely to irritate skin than duct tape. Additionally, moleskin provides cushioning which helps prevent chafing from occurring – an important factor in blister prevention. Both moleskin and duct tape can help prevent blisters while hiking. It all depends on what kind of situation you’re facing out on the trail. Whichever you choose, make sure to have some of both with you on your next hike! For more information on preventing blisters, read How to Prevent Blisters while Hiking. 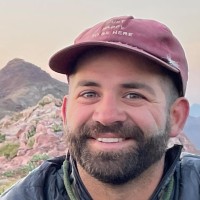 My goal with my writing and Know Nothing Nomads as a whole is to share my passions of hiking, camping, and a love of the outdoors with our readers. Making the difficult and uncertain feel more approachable to people that might not know enough to feel comfortable taking their first steps into the wilderness is a driving factor for me. When I’m not writing you can find me on a trail, in a forest, or next to a river with hiking shoes on my feet and a fly rod somewhere close by.