Colorado is home to a lot of black bears – about 17,000-20,000 within the state’s borders. Bear encounters can be hard to avoid when there’s so many, but we can at least try to take the proper precautions to protect ourselves and the bears. I recently read an article that practically brought me to tears: We Killed a Bear by Taryn with Happiest Outdoors is an article about how campers and hikers at a local lake sentenced a bear to death because of their actions. This article went viral back in 2016, and is even more relevant today as more and more bears are euthanized each year. Her words really stuck with me and I hope they inspire you to follow the steps below to help us kill less bears in future years.

We killed that bear. Maybe we thought we were just on a camping trip or going for a hike. But in the process, we also killed a bear.

What exactly does it mean when a bear is sentenced to death because of humans? When campers, hikers, and backpackers leave behind trash or don’t store food properly, the scent attracts bears in the area. The bear(s) come to investigate, and are rewarded with easy food. The bear starts to associate that trail or campground or house with this easy food, and frequently returns in search of more. When people allow bears to find easy food, a bear’s natural drive to eat can overcome its fear of humans, and once a bear loses its natural fear, the risk becomes too great that it will harm a human for food. Bears can break into a tent with sleeping campers, break into a home, or even attack a human. At this point, Colorado Parks and Wildlife (CPW) must make the difficult decision to euthanize the bear to protect the humans.

CPW euthanatized 120 and relocated 89 bears in 2020. Both numbers were up from 92 and 44 in 2019. There were 4,943 bear reports in 2020 – these reports include anything from sightings to direct conflicts. CPW even reported more than 360 times that bears broke into a home, cabin, or other dwelling. The number one cause for bear encounters? Trash. Bears are smart, but also extremely lazy. Their goal is to get the most amount of calories they can with the least amount of work. Trash cans, dirty campgrounds, and hiker waste can all attract bears and start the process of association.

Chances are you’ll never encounter a black bear, but it’s best to be prepared and know how to prevent and respond to conflict.

Every time we are forced to [euthanize] a bear, it’s not just the bear that loses. We all lose a little piece of the wildness that makes Colorado so special.

Hiking in the fall in Breckenridge

What To Do If You See a Black Bear

If you see a bear nearby while hiking, enjoy this beautiful window into nature from a distance. If the bear reacts at all to your presence, including lifting its head, you’re too close. Stand still, stay calm, and let the bear identify you and leave. Talk in a normal tone of voice. Never run or climb a tree. If you see cubs, the mother is definitely near by and you should leave the area immediately.

If the bear doesn’t leave, wave your arms slowly overhead and speak calmly. If the bear huffs, stomps its paw, or pops its jaw, it wants you to give it space by slowing backing away while keeping the bear in your sight. If the bear stands up, it’s just trying to see what’s going on by getting a better look and smell.

If there’s a bear nearby that is coming towards you or your camp, make loud noises by banging pots and pans, yelling, or blowing a whistle or you car’s horn. You can also toss small stones in its direction, but not directly at it. Never run. Stand your ground. If you have bear spray and the bear is within 40 feet, now is the time to use it. If, in the rare instance, you’re attacked, do not play dead. Fight back with anything available.

Make sure that the bear always has an escape route, as trapping it will be more likely to evoke an attack response.

Counter Assault bear spray can be purchased at REI.

Bear spray is a highly concentrated pepper spray in a container that shoots out up to 40 feet. While bear spray has been shown to be more effective at deterring bears than firearms, it’s no substitute for taking all these precautions to prevent encounters in the first place. Carrying bear spray is strongly recommended in areas with grizzly bears, such as Glacier National Park in Montana. In places where brown bears roam, like Colorado, you’ll find people far and few between who actually carry bear spray. We’ve hiked hundreds of miles in the Colorado Rocky Mountains and have never carried it or encountered a black bear. That being said, if it makes you feel more comfortable, then carry bear spray. If you’re going to carry it, at least make sure you’re carrying it properly by securing it to the waistband of your pants. We’ve seen hikers carrying it on the outside of their backpack, and all we can think about is how the heck they’re going to reach it in the event of an encounter.

What To Do If You See a Bear in Your Yard

If there’s a bear frequenting your home or neighborhood, you can do your part by making sure your trash is secured properly, bird feeders are inside, and pets and their food are properly secured as well. According to CPW, there are some hazing tactics home owners can use to help ensure bears retain some fear of humans. This includes, but is not limited to, setting off car alarms, shouting, banging pots and pans, air horns, and more.

Things You Can Do at Home

“Bear proof” trash cans are commonly offered by trash companies servicing areas where bears are common, but you should know not to rely on these containers. We have one at our home in Breckenridge, and bears were still getting into them. They flip the cans over and over, pushing them around the driveway until the lid pops open. Once this happens, you can guarantee that they will be back again and again. We now store our bear proof container in our garage, only taking it out to leave on the curb the day of trash pick up. Putting your trash out the morning of pickup decreases the changes of a bear visit from 70% to 2%. Bears still stop by and walk around our house, so we are always extra cautious to bring bird feeders inside and not leave out any attractants.

Get Your Neighbors Involved

Even if you’re doing your part to minimize bear encounters, but your neighbor isn’t, you can be sure there will be continued conflicts. Make sure to talk to your neighbors about what they’re doing to properly store trash and food, and if they’re bringing their bird feeders inside. If the visitors at your local Airbnb down the street don’t follow these practices, make sure you are reporting the rental to the proper authorities so they can contact the owner and ask them to enforce their policies. 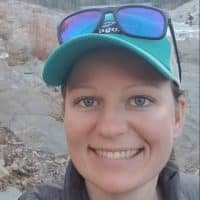